If you have tickets to one of our events that has been cancelled. We are doing our best to reschedule those concerts.

The tickets you are holding will be accepted in exchange for any other concert we produce or can be exchanged  for another show you would like to see. Your tickets are still good for the date of the  rescheduled concert.

Your tickets are good for exchange forever.

Currently we have paused sales on all concerts until we have more information from the Provincial Government on when we can resume events.

We appreciate your patience while we deal with the changing situation of Covid-19, please stay safe and continue to visit this website for any updates or announcements.

A Night with Alabama - Rescheduled to Friday, Feb 26, 2021 Hold on to your tickets they are good for this show
This event was moved from Friday May 15, 2020 at 7:00PM - Location: Hanover Civic Theatre

John Cougar Mellencamp - Rescheduled to Friday, Mar 12, 2021 Hold on to your tickets they are good for this show
This event was moved from Friday May 22, 2020 at 7:00PM - Location: Hanover Civic Theatre

Maclean's Ales Boots & Brews 3.0 - Rescheduled to Saturday, August 22, 2020 - Keep your tickets they are good for the resheduled date. If we can not produce the concert we will be offering refunds for this event.

Recently, the Broadway musical Jersey Boys became an international hit and brought attention to the hits of Frankie Valli and The Four Seasons and the 1960s.

The Jersey Seasons not only appear to look like the original group from the 60s but also their vocal sound of a young Frankie Valli is reminiscent of their 1962 appearance on the Ed Sullivan show.

The look, music, and harmonies of the original Four Seasons are all intact and this group will perform the hits that audiences love, like Sherry, Walk Like a Man, Dawn, Rag Doll, Big Girls Don’t Cry and Can’t Take My Eyes Off Of You and they are all done with ease and the nostalgic flair of those years gone by.

Close your eyes and it’s the real Frankie Valli and the Four Seasons!

All of the instrumentation and vocal harmonies are performed LIVE and with the aid of no tracks. 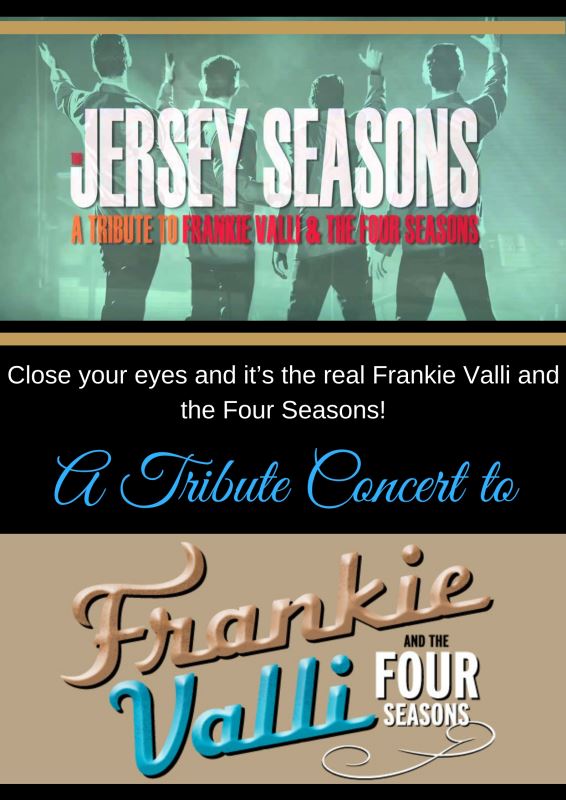