We would like to take this opportunity to thank you for being a part of the last ten amazing years as we have been growing and bringing bigger and better shows to The Hanover Civic Theatre. Many entertainment companies have been hit very hard by the pandemic. Many are not financially surviving. Theatre and concert companies are facing the reality that we will be the last to be operational again. I want to take this time to once again thank all of you who have held on to your tickets to help us survive. You truly believe in this company and Arts and Culture in Hanover and we thank you!

We are doing all that we can to keep Back Porch Events and live concerts alive and I am determined to visit with you once again at a show in the future. We are in a difficult situation right now and have paused all ticket sales due to the pandemic. Please know that all tickets you are holding are good forever. You can exchange them in the future for any other concert we will be hosting once we are able to produce again. Please hang onto the original ticket as they will be automatically transferred over to the new date. New event dates will be announced as soon as we get updated information from government and local health officials regarding group sizes, infrastructure requirements and travel restrictions. Please follow our Facebook pages, (Back Porch Events & Hanover Civic Theatre) and our website ( www.backpoprchevents.ca) for updates.

We have rescheduled a few of the concerts we had to cancel with hopes that 2021 will be a kinder year and we will be able to put this pandemic behind us and return to a more normal life for all of us. We will send out another newsletter as soon as we have more information from the provincial government on when we can begin producing shows again. We look forward to seeing all of you again as soon as we can. Be well and stay safe, we miss you all and hope for a return to live music as soon as possible. Thank you for your understanding and patience.

John Cougar Mellencamp - Rescheduled to Friday, Mar 12, 2021 Hold on to your tickets they are good for this show
Moved from Friday May 22, 2020 at 7:00PM - Location: Hanover Civic Theatre

Billy Joel "Pianoman"  - Rescheduled to Friday, May 14, 2021, please hold on to your tickets they are good for this show. 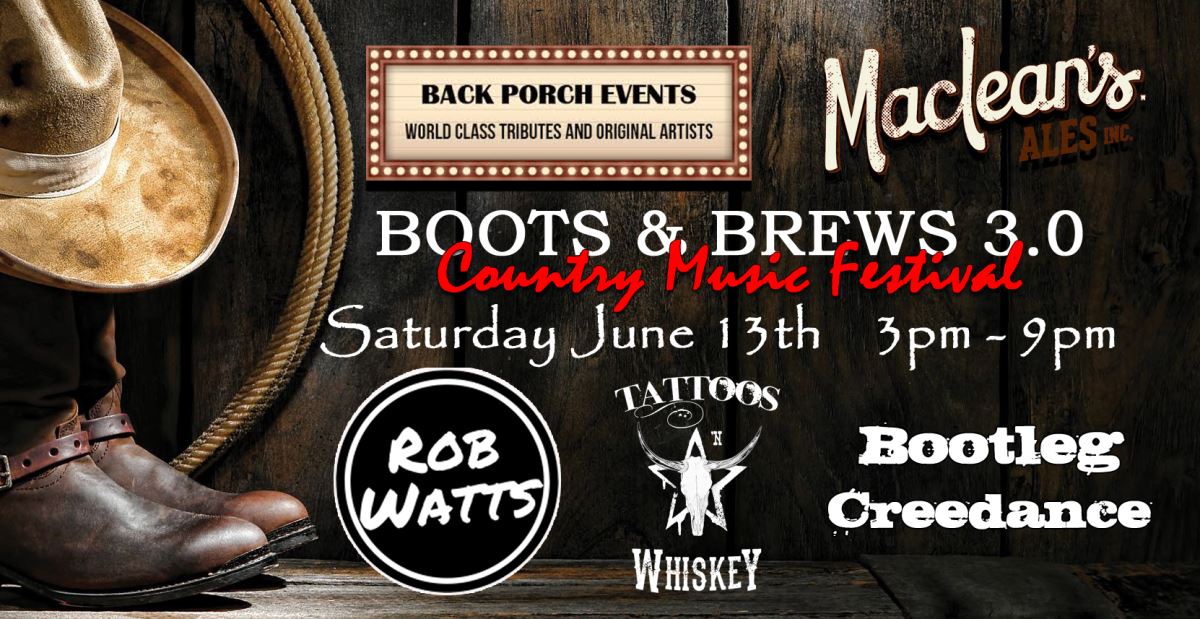 MacLean's Ales & Back Porch Events of Hanover are partnering up again and are proud to announce "Boots & Brews Country Music Festival" 3.0, to be held behind the MacLean's Ales Brewery in the Hanover Industrial Park! Almost 500 guests joined us for Boots & Brews 2.0 and all had a great time.

Boots & Brews Country Music Festival is all about celebrating Friends, Boots, Craft Beer and Great Country Music! Grab your best dancing boots and get ready for an amazing Country lineup!

Delicious food, ice cold beer and coolers will all be available for purchase!

What to bring - a change of cloths in the event of rain or cooler evening temperatures, a lawn chair, cowboy hats, boots and smiles!

What you can bring in - unopened water, snacks (chips, cheesies, etc.) please know that you bags will be looked at to ensure alcholic beverages are not brought on site.

Bands have been announced below... 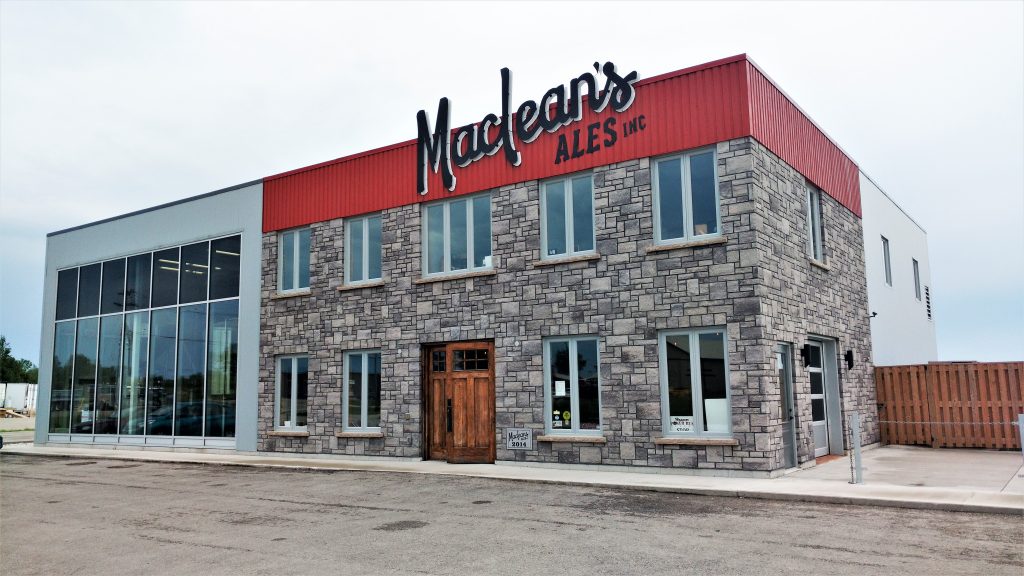 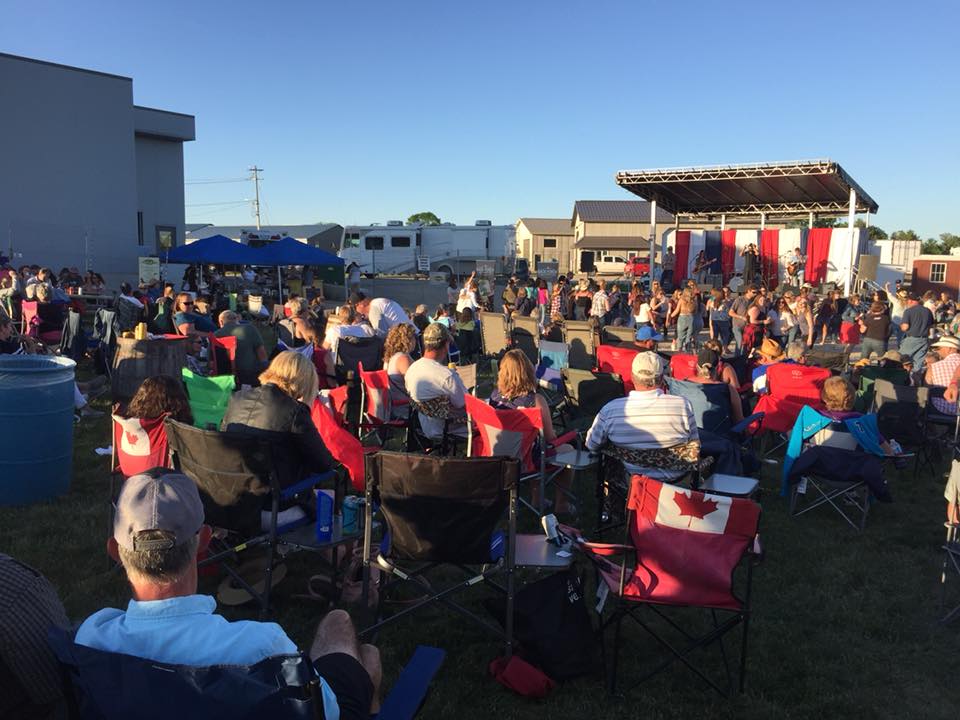 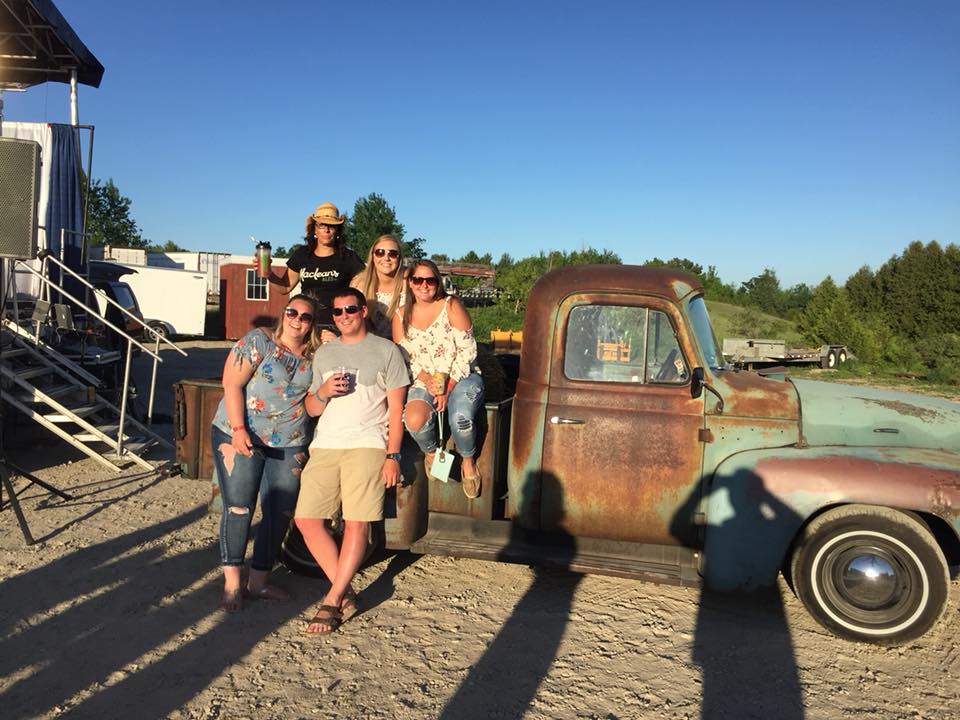 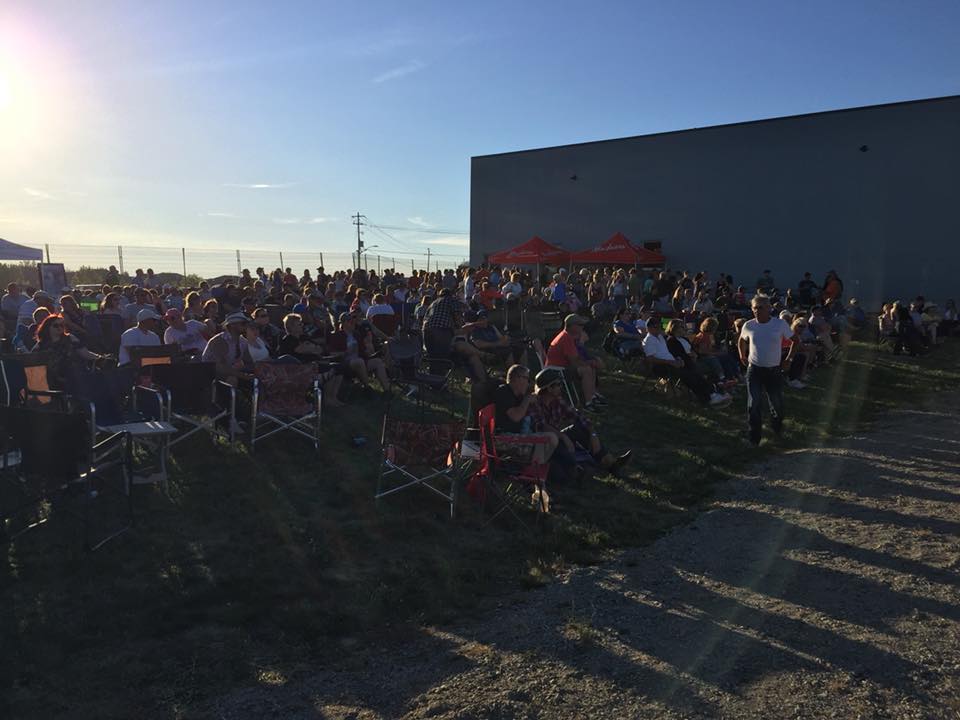 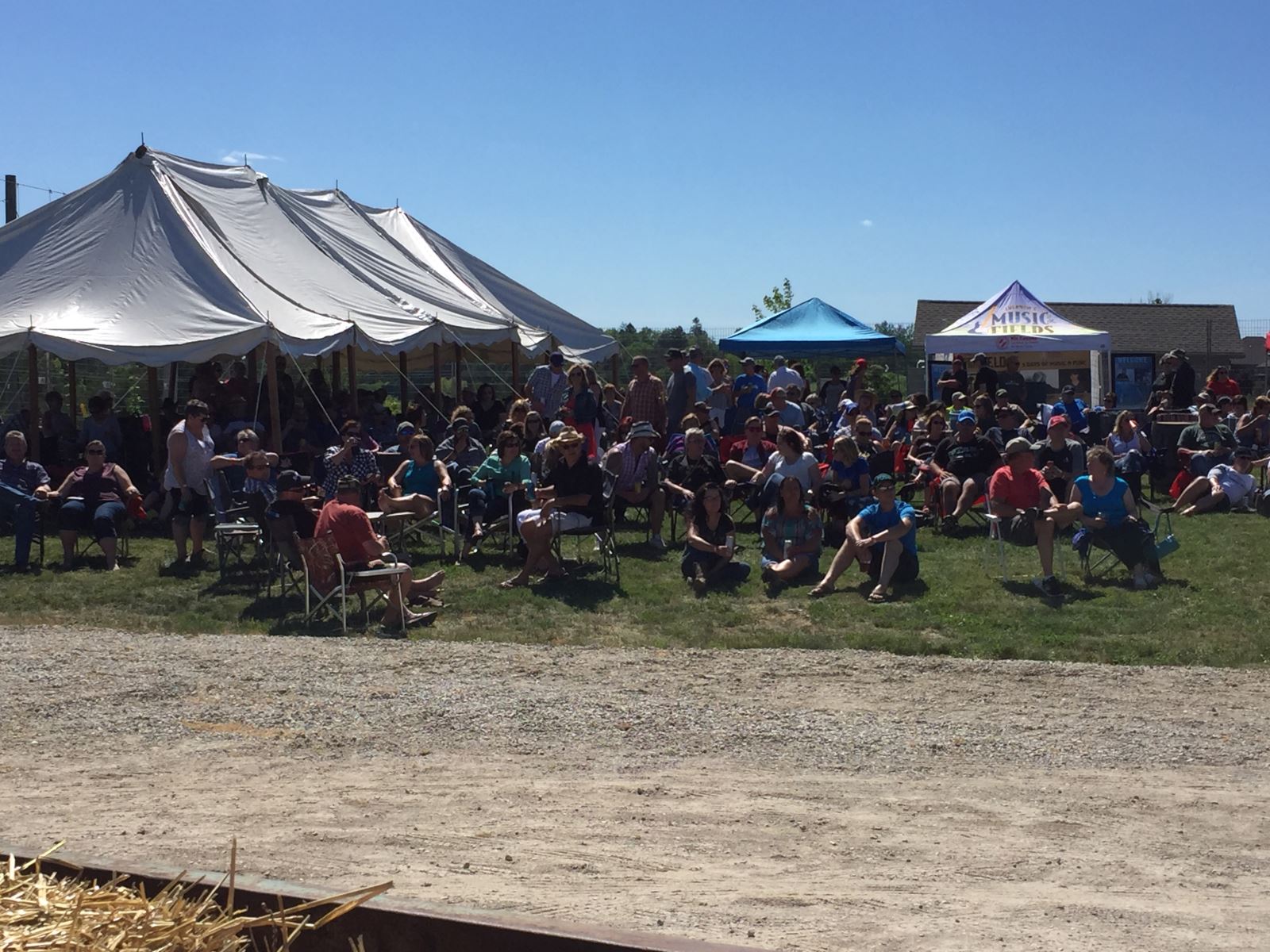 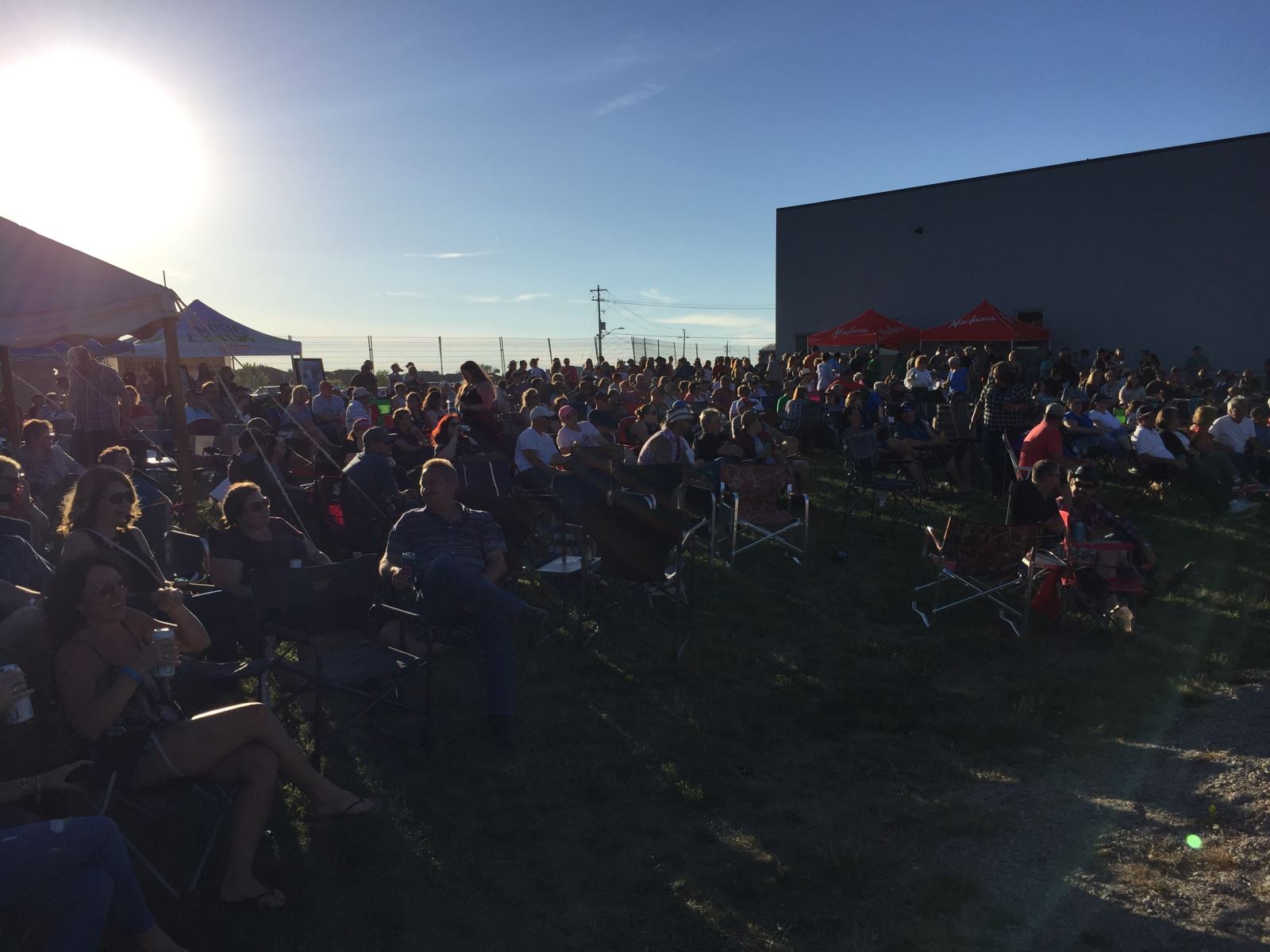 The Rob Watts Band - On Stage at 3pm

Rob found his love for country music at a young age, as he recalls his parents always having it on at the cottage.
He revisits how he came into the world of music; "When I was 10, I played guitar for 2 months, then got bored with it, and eventually dropped it all together. Some years went by, and I found myself playing my stepdad's old Fender Stratocaster every day when I'd get home from school. Teaching myself how to play basic chords, and I really got addicted to it. Guitar turned into drums, drums turned into piano, piano back to guitar, and in high school I put my lips to the mic for the first time, and I haven't stopped singing since."

Formed in May of 2015, the members of the band are humbled to have played well over 200 shows, including opening for artists such as Thomas Rhett, Brett Young, Aaron Pritchett, Jason McCoy & The Road Hammers, The Washboard Union, Meghan Patrick, River Town Saints, Bobby Wills, Cold Creek County, George Canyon, Dan Davidson and more, as well as sharing the same stage as legends such as Alan Jackson, Florida Georgia Line, Dallas Smith and more.

In 2018, Rob and his band made a career dream come true by playing the Main Stage at Boots and Hearts, kicking off the final day of the festival.

The "Rob Watts Band" pride themselves on a high energy, crowd-involved, live performance and put their own spin on what's now considered modern country music by highlighting some of the key elemental instruments used in classic country, while keeping the tempo up, and the songs catchy and fun.

Tattoos 'N Whiskey are a a Rock'n Country band based out of Southern Ontario. Astounding lead

Rocked and Countrified! Or as they call it feeling #INKEDANDBUZZIN

Growing up in the small town of Mildmay ON, Owen spent most of his time playing hockey, and riding dirt bikes. He picked up a guitar for the first time when he was 11 years old, but didn't re-visit it until the age of 17. After discovering his passion for music, Owen began spending most weekends in local pubs playing country cover songs, and during the week writing songs.

At 21, Owen graduated from the Ontario Institute of Audio Recording Technology (OIART) for music production, and was finally able to produce and release his own music with his first release being in July of 2019.

Owen has since released 3 songs and does not plan on stopping. He recently formed a band in his home town where they are starting to pick up traction locally. He also plays with the BBR, a band from Hamilton ON, as vocalist and guitar player, you can see them play at the Stampede Ranch in Guelph. Owen is driven and more excited than ever to create new music in 2020. This is just the beginning.