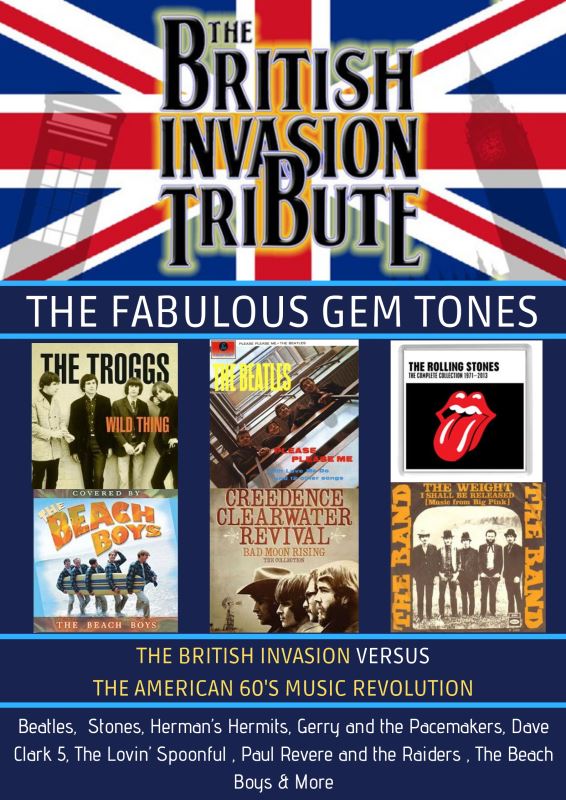 In the mid-1960’s, North America was swept by a wave of rock and pop from the UK that would have an enormous impact on music and pop-culture for generations to come. Inspired by American rhythm-and-blues and rock-and-roll of previous decades, young British groups began to infuse these styles with up-tempo melodic pop and fiery guitar-based instrumentation; bands such as The Beatles, The Rolling Stones, The Who, The Kinks, The Yardbirds, and Herman’s Hermits took the world by storm in a phenomenon known as the “British Invasion”!

Add in some of the greatest hits of the same time period by some of Americas greatest bands... Many of the most popular bands of the time joined the "British Invasion " and crafted albums of their own that featured and experimented with a roots sound. Some of the bands that created music in the style of this broad genre included The Rolling Stones, The Doors, The Band, and Creedence Clearwater Revival.

People are raving about The British Invasion Show!

This Gem Tones bring the sound, look, and energy of this watershed moment in music history to the stage wherever they perform. With ear-catching melodies, powerful vocal harmonies, vintage tones and attire, this group of highly trained, multi-instrumentalists has thrilled countless audiences, taking them on a trip back in time!

The Beatles, The Rolling Stones, The Who, The Kinks, The Yardbirds, Herman’s Hermits, The Animals, The Dave Clark Five, The Zombies, The Searchers, Gerry and The Pacemakers, The Spencer Davis Group, The Tremeloes, The Troggs...