Back Porch is busy working on concert dates for fall 2021-2022....stay tuned for our coming lineup.... lots of variety for all tastes! See our shows at the Historic Gayety Theatre in Collingwood, Owen Sound Roxy and the Hanover Civic Theatre....

Back in the early 90’s, when Powerhouse decided to put together their Chicago Transit tribute act, they were the first in the world to do so.

Today, they remain as the longest running Chicago tribute band and the only one to carry four lead vocalists, just as the band Chicago does. The band’s 5 singers, 4 of which are lead singers, the 3-piece horn section and the intricate horn arrangements of the band’s past trombonist, Dan Elliot, made this show a natural for the band – even getting credit from the band Chicago themselves, back in the 90’s.

This band has been together for over 25 years, with its 3 piece horn section, four piece rhythm section and four lead vocalists is able to cover all the Chicago material from the early horn-dominant classics like ‘Make Me Smile’, ’25 or 6 to 4’ and ‘Saturday in the Park’ to the later, softer, keyboard-oriented ballads like ‘If You Leave Me Now’. 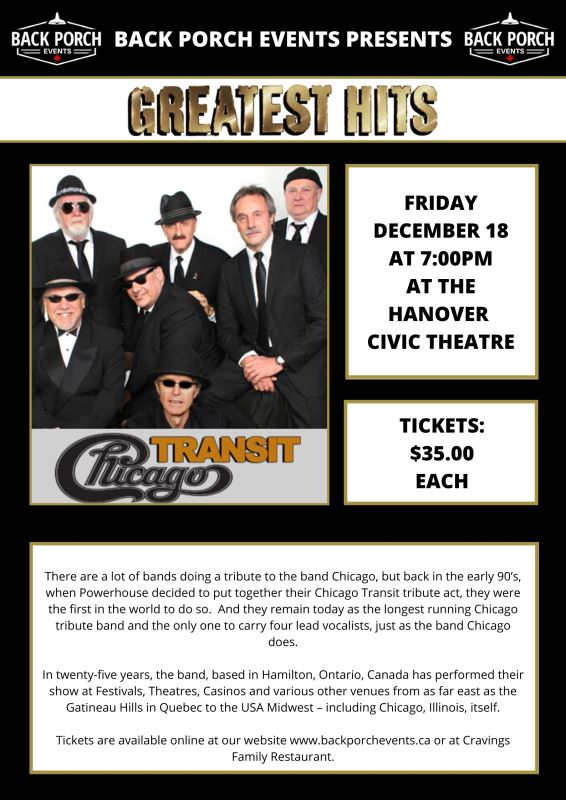